Challenging myself, the awakening

There are times when you need to re-think much of what you do. I myself look to challenge me more, reinvent me from time to time. To seek new ways of doing things, new perspectives.

Over the entire 2021 I was thinking about that, and came up with something which I find appealing and challenging again. A joy feeling that I missed.

Indeed, on the sound side, when I looked at it with a magnifying glass I found out some aspects that I feel it needs some further exploration. And that is the mystery of the low frequencies and their effect on the mind and body.

Thus much of my audio tries, beginning early in 2021 was to develop myself on to working with those frequencies more. From how they can be "manufactured" to how to handle them in mix and mastering.

There are some aspects that goes with those frequencies, on one side they can soothe the mind and on the other side they are able to reinvigorate some inner states, they create in some, also a kind of addiction (my drug is the music!). Feeling an urge to listen more...and more. This is interesting, the way that the frequencies evoke from within a certain calming, pleasure-sweet feeling and a desire to remain there as much as possible.

My first attempt to create something with this in mind is the new release with ABBILDUNG - "They Shall Wake". Along with the story that develops further (around The Other Dreamers" series) I needed to create a sense of deep, remote, almost lifeless and at the same time of late awakening to some higher consciousness levels of those creatures out there.

I needed to conclude the story, and I am glad to have found it. As the creatures were awakened by our dreams to higher consciousness levels, they ultimately are becoming the new casters of some dreadful dreams.

This means, the consciousness levels of the creatures in the Universe are elevated only when they receive those dreams. Afterwards, in return they become the next casters, the new awakeners and the cycle repeats from one race to the next. Thus the Universe runs on dreams, and that way it gets itself bootstrapped into self-awareness. 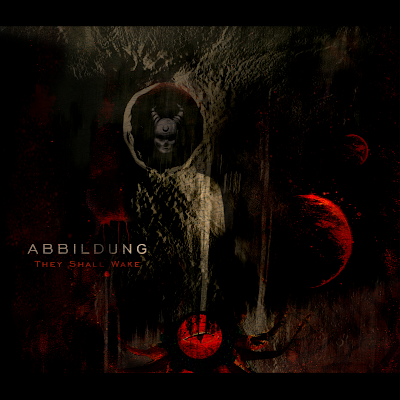 Going to composition again, the low end frequencies plays a big role in this release, and I put into practice some aspects, technical and psychoacoustic. I think right now that the ultimate effect should bring a sense of emergence, to a remote place, as well as a bass-bathing experience - when played at higher levels, it should give "goosebumps" or "Gänsehaut".
As I usually do like to do my own covers, I am fortunate, I got some great input from family and close friends and I eventually (took some months) came up with this version (out of 5 in total) - I am very comfortable with the final result, it fits the original story and concept perfectly.

The exploration on the sub-bass subject sure to continue and with it I found it necessary to create a suitable label for this new approach.

Deep Wounds Records is the concept label I created in order to gather that kind of records. [Bassphemies Confessions] is the label subtitle, which I think it makes a lot of sense, since we talk about inner strong evocations through low frequencies.

The debut album is the new ABBILDUNG album. And inviting fellow artists to participate in this new endeavor, to challenge themselves...