The isolation times of 2020 gave a lot actually, especially to *already* not so social people. In this positive aspect, I can think of a lot of artists - one downside was the lack of live performances but on the other side there was an opportunity to stay with themselves more...

I spent some more time with the guitars and my tunes and also had some streaming live sessions on twitch platform. Things evolved shortly and a new album took form. A special album that marks the special times of isolation during first pandemic wave and also is a special kind, a live in studio album, mixed accordingly, without much editing nor mastering.

Was some excellent time, had to mention that two other things converged to the album creation:

there were some photos sent to me by a friend of mine (thanks "Bebe"), some excellent photos from the same isolation days, of an old block in Bucharest. That kind of building that withstood the test of time not so well (remember the 1977 Earthquake).

finding a title for the album was challenging in a way (the working title was "isolation" a much too used one) but that changed just in time.

"Aphanasis" has a deeper meaning actually, maybe a more general one than of 'fading away.' A meaning in the context of any thing, an intrinsic meaning within all things (coming from psychoanalysis). It is even a definitory meaning, precisely of disappearance, the one that makes things existing.

The final artwork (complete on the CD version) contains elements of the concept, and some other subtle ones, to be discovered. Also asking what is there a black metal sign on it? For one thing, this is a special one not randomly selected and second, the album contains some hints at that genre. Also as just let here for others to be discovered. Also this is more and more in connection with some Essentia Mundi releases that will be presented in the next months. 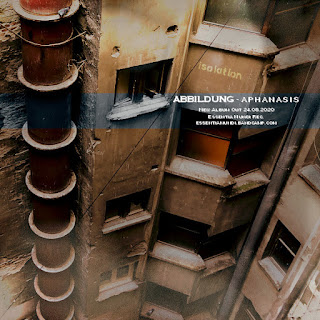 So this could be in the end the most interesting year so far for the label and me. This is my second album this year after "Braahia" which was as part of "the other dreamers" series and "Aphanasis" as a testament of the isolation times. Stay close to find out more also about Essentia Mundi new releases.
Promo clip
https://www.youtube.com/watch?v=XsTuHOlhrYY
Purchase:
Posted by Essentia Mundi at 11:13 AM