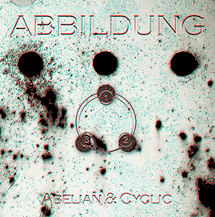 I just finished (but currently not released) a new ABBILDUNG album that was long time planned. Sooner or later I have to keep my promises...Originally intended as an EP that followed the "Two-Sphere Geometry" back in 2008, the new album called "Abelian & Cyclic" contains 5 tracks, about 59 minutes:

The Generator track is actually the core of the release, the track is composed of three parts and it plays with the idea of the Group Theory applied to life. The track was recorded in 2008, contains field recordings, acoustic instruments, it is a mid complex composition, very much to be discovered in it.

Identity has a deep atmosphere (some say much like a Lustmord track.) I like it a lot.

Multiplication takes the Generator track sounds to a more psychedelic plane. Uses also fieldrecordings from a train station in Sibiu (my birthplace).

Mittelpunkt is a minimal track, used fieldrecording from an clock store in Prague. Pretty interesting the result, has also an industrial feeling.

The Tarkovskian Dream is a track that reveals to me exactly what the title said. Partly abstract partly very organic on a dreamy plane, black and white, gray if I can say so, it really touches some unexplored places.

Preview the release on SoundCloud: