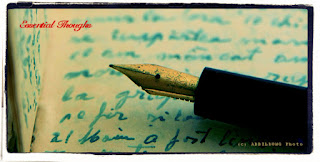 What a daunting mission a philosopher has. In a pursue for truths, models, original line of thoughts if one is to be convincing has to read all there what was written in the domain. Just a thought, what if Slavoj Žižek did not seriously read Wittgenstein? I can argue that after some time studying his works, his mindset is in much the same anti-intuitive "world" of ideas. He can be seen as a capable philosopher that puts forward an instance of Wittgenstein and more - it shows how things are with the same tools: the language and world representation that finally is leading towards the end of philosophy. He is much more close to Wittgenstein than he may think. Still I do not know if he dedicated to much to really get deeper into his works (not only what he has directly published) so the questions remains.

It is interesting that the language games are beginning to take more attention, in that what Wittgenstein thought, and from my point of view, reached the ultimate model of human meaning, through language and analyzing how it functions in human culture. I dare to say that Slavoj is one of the philosophers these years able to untie the knots, in a more practical way, and successfully exposes how it all functions also related to today's issues. Much like Chomsky and other notable - a few philosophers these days - are language critics and practicing anti-philosophy, just like how Wittgenstein paved the way.

In today's crisis induced by the COVID-19 virus (and by what all the countries' heads imposed measures in order to tackle the problem - we see the state taking power from the people already by some of the measures) we could well land into a new recession and there is expected sooner or later also a shift in the worlds affairs. Maybe a schism that can turn very bad, into anarchy and great depression, or the one that will move towards a left-oriented capitalism model. With the rise of the ones to set our priorities as a whole and set the actions with total responsibility: with regard to pandemics, health care, nature, AI, money, true anti-monopoly, products manufacturing, etc.

In this regard, I can see that this makes even more interesting to look after some things in Slavoj saying - as it is giving maybe a glimpse of what should or would be put in place after the CORONA-19 crisis.
And this man can even get what he is preaching, one of the rare cases in which the philosopher gets - in his lifetime - the ways he wrote about.

From the US philosophers though, Richard Rorty was the closest I could find that in a true sense is a Wittgensteinian. In that we should throw the ladder, and renounce the ancient thinking perspective of ontotheology / Platonist tradition.