The Burzum tribute to mark an end 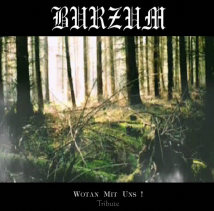 I started the Ancient Beliefs as a label when I first collected some tracks from the old Burzum website, a website that went off-line some day (in 2002 I think), but luckily I had the tracks already saved and listened to them daily. The idea was to save those tracks, pity to loose them. I contacted some of the bands for acceptance, and although some said no problem, most of them were still unable to be found or no answer received.
That is why I think the compilation has also a bit of 'bootleg' in it. That is why the first edition never gone into sale.

The 2009 edition was entirely re-mastered in Ancient Beliefs / Essentia Mundi studio. So the release has now a 'Cruel Sound Works' logo on it, I get the best possible sound from some very low sources. Also developed the color cover, that it's raw low-res, but it fit even better with the music. This time, because I invested so much time and hearth in it, I have to ask a small price for it.
It is very limited in run, I think 50 will be made.
The make for it also marks the end of Ancient Beliefs as a label. All efforts concentrate on writing articles, promotion and concert reporter, organizer. And of course on continuation of producing music with Essentia Mundi, now my main body of work.

The Burzum Tribute "Wotan Mit Uns!" (remastered) can be ordered here.
Posted by C. at 1:37 PM